Put Wings to Your Future!

The skills to be enterprising 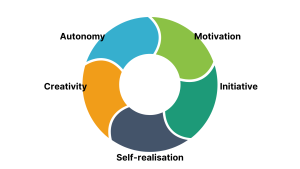 At the end of the job-coaching activities the participants were asked to self-assess with respect to the 5 skills that are essential to develop an enterprising identity. 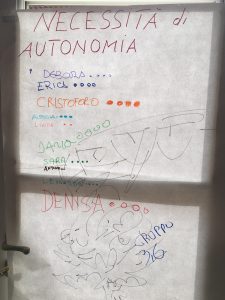 The need for autonomy found the group’s highest average score: 3.6 out of 4. Everyone feels more or less strongly the need to be autonomous and to decide for themselves.

Only L. chose to give herself 2 dots, the lowest score. In fact, she was the only participant who did not show a strong motivation to look for a job or a training course.

On the other side of the spectrum, the lowest score of the group concerns the spirit of initiative: 2.8 out of 4.

Everyone is aware of this weakness which blocks all their initiative. The participants who gave to themselves the lowest scores have a high professional potential, but they cannot express it. 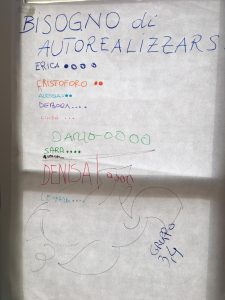 Between the two extremes lies the need for self realisation, which everyone feels very strongly. This need has emerged very clearly by the group in the debriefing on what kind of work they want to do. If on the one hand, almost all of them confirm that they have only an „economic“ motivation, on the other hand, they are all motivated by the desire to find personal fulfillment in their work. 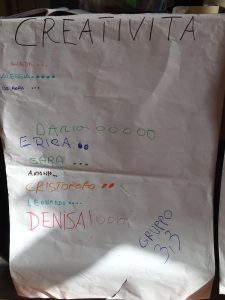 As to creativity, the group is positioned in a medium-high level: 3.3 out of 4. This competence clearly emerged during the group exercises, in which we asked participants to redesign objects and develop promotional campaigns. 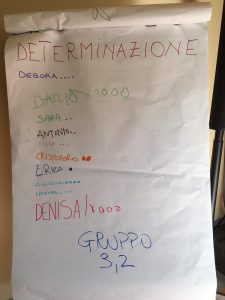 In order to carry out their projects and pursue the imagined action plan, motivation and determination are essential skills. On this competence the group has estimated an average of 3.2 out of 4.

All participants updated their Curriculum Vitae, registered in the employment platform of Regione Toscana.

All of them drafted an action plan describing their employment objectives, eventual training courses to attend, strategy on how to achieve their goal.

According to the mental services in charge, they demonstrated a new positive attitude and engagement.